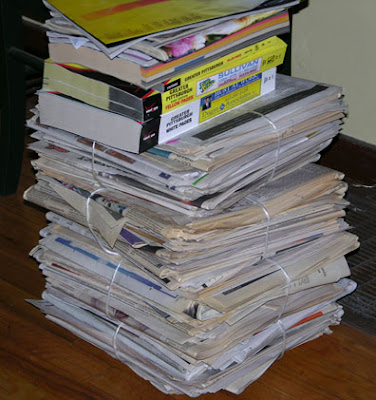 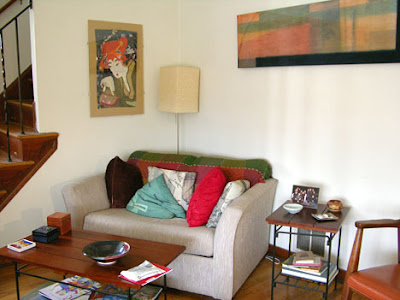 RRRRg- I just spent all this time rearranging the pictures I wanted to upload only to discover it didn't work. Anyway, the top pic is a view of the backyard. Off to the right is a view of the South Side and the Monongahela River. Along the left retention wall is a garden left by the previous owners where tulips and Irises are growing, and some other mystery bulbs. The fences along both sides are rotting and the one in the back is falling down-- I would love to replace them and put hedges along the back. I can't wait to plant a garden of veggies and herbs. The backyard seems like a big blank canvas to me-- we talked about making a small stage in the backyard for someone to stage plays and performances with a view of the river behind. It'll be so nice in the summer- when the weather warms up again! I have started some projects around the house-- tying all the newspapers Douglas has collected in prep for recycling them-- here is one of what will be 2 piles. I also organized some cabinets in the kitchen (this made a really boring picture). The pre- organized cabinet was full of packing materials, phone books, and paper plates/plastic utensils. Now, it's stocked up with some food! My other favorite project was purchasing a shower filter and installing it myself- When I did that though, I cracked the old showerhead! So I replaced it with a massaging shower head with different settings-- NICE! I love being handy around the house! Next we have one side of the living room-- notice the teeny tiny couch- it's more of a love seat-- that's my geisha collage above on the left- and Doug's friend Susannah's painting on the right. Here is a view from the dining room looking into the front of the house-- which is the living room on the other side from the love seat (the backyard is behind me from this angle). There's Douglas at the piano. We're thinking about painting the dining room light blue instead of yellow. 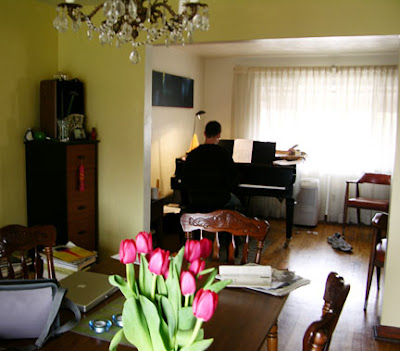 Meanwhile, I started my new part time job at the City Theatre box office. Everyone there has been very warm and welcoming. Last week was a good time to start since they're between productions and it was on the slow side. I take phone orders and will at the will call office on Thursdays and Sundays handing out tickets. It's pretty laid back and flexible. I will work there 4 days a week-- but some of the hours are a little odd.

D and I have gone to see 3 movies: The Lives of Others (Excellent), The Namesake (Good), and Hoax (Really great!!) The Lives of Others is the German film that won Best Foreign Film at the Academy Awards-- It is set in 1984 in East Germany, the Stasi (secret police) create a climate of distrust and stifle any criticism of the state-- The story focuses in on one particular Stasi officer who is staking out a playwrite under suspiscion of being an 'enemy of the state.' The officer is depicted as solely devoted to his job. He has no family, just a lonely apartment. He has no social outlet, or creative life. His scenes are filmed in a harsh gray, drained light. Meanwhile, the playwrite has friends and a creative circle of author, playwrite friends-- he collects books on all kinds of subjects, reads Brecht, plays piano, lives with his girlfriend who is also an actress in his play. The invisible relationship that forms between the Stasi officer and the playwrite holds just enough suspense and the actor who plays the officer handles his transformation -- from cold and removed to taking an interest in music, and reading Brecht-- to becoming emotionally involved in the lives of the playwrite and the actress --- delicately and with smooth transition...... Great movie!!
That's all for now!
see ya!
at 3:43 PM