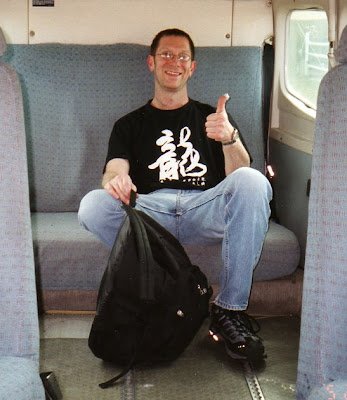 I'm so happy to be able to share this interview with you! This person really inspires, encourages and supports me on a daily basis. His name is Douglas Levine. Once, I overheard him with a piano student saying, "Don't practice like a farm animal. You're hitting your head against the wall like a cow." I wrote that down in my sketchbook, and have a good laugh at it every so often.

(Photo: Douglas on the tiny plane during our trip to Belize taken by Lauren Braun. (He had a band-aid on his thumb.)

How do you maintain such intense focus on your work?
For me, nothing focuses creativity like a deadline. Collaborating also helps coral that sometimes elusive rascal, Mr. Focus. When I’m only beholden to myself and without a deadline—like just trying to work on ‘my own stuff,’ focus is much more inconsistent.

Do you ever get bored with what you're doing? How do you work through it?
One nice thing about having many creative hats (composer/arranger/performer/music director/teacher) is the necessity of changing it up with regularity. Nonetheless, drudging and uncreative projects present themselves. Like having to reduce an orchestral score for a smaller production. Or transcribing someone’s music from a CD or audio file. With luck, it pays well AND a deadline is looming.

What is your daily creative practice?
I used to make sure to practice the piano at least an hour a day, come hell or high water. Alas, this no longer seems to happen, as my focus has shifted to the writing. Writing is tough and slow, for me. Though I’ve been at it for over a decade, I’ve yet to find a consistent routine. It varies from project to project. I’d love to have a block of 4 hours a day to write.

Who/What inspires you?
I’m inspired by anyone who commits to the daily grind of being a creative artist, and manages to stick with it for the long haul. Nobody else can make your art, so if YOU don’t make it…a little trite, but true.

Who/what have been your greatest mentors, muses, influences or champions?
I’ve had some wonderful teachers, but didn’t find a mentor until my mid-20’s, in my graduate school piano instructor, Ralph Zitterbart. Grad school marked the first time I felt confident and settled in my choice to make music my life. That’s when Ralph came along…I wasn’t ready for a mentor prior to this.

What is your dream project?
I simply hope to always be working on a new music, dance or theater work that is actually in the pipeline for a production. To someday make respectable $ doing so is, I suppose, where the dream aspect filters in.

What has been your greatest reward, creatively?
To collaborate with the talented Marcus Stevens on the 3 year journey of writing and performing the new musical Eastburn Avenue. A second production (or new commission) will be the next greatest.

How do you feel about the music you create after it's all finished and being played?
I’ve had very few experiences with being able to listen to my own music being performed. The vast majority of my projects have included me as a performer. The times I’ve gotten to be a listener have, in recent years, been more fun and gratifying than when I was younger, and the self-critic would get the upper hand.

What is the best compliment someone could give you?
A couple of times I’ve received compliments to the effect of, “It’s not really my cup of tea but I came (to your production) anyway, and it really affected me.” It’s nice to know that your art can impact people at an emotional level.

By contrast, sincere compliments from artistic peers are also reassuring. I once hired a serious jazz drummer for a children’s musical I scored that had a swing and funk influence. During the first rehearsal I overheard him say at one point, half under his breath, “hip.” It warmed my heart.

What project(s) are you working on now?
Presently I have a healthy mix of projects, musical directing a big conservatory production for Point Park University, writing a new one-act musical, and preparing for two upcoming cabaret concerts.