I'm pleased to present an interview with film-maker, Mika Johnson. 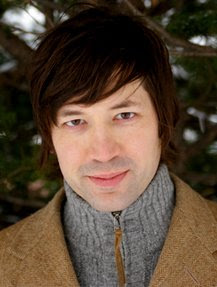 Mika is currently working on a feature film, Amerika: a notebook in three parts. We have never met, but I've heard great things about him and his creative work from our mutual friend and collaborator, Honey Lapcharoen.

Can you tell me about your interests?
I’m an avid fan of the cinema, devoted mainly to the poets and visionaries. I also have a strong interest in photography, mostly for works that blur the distinction between truth and illusion or fantasy and reality. I like real scenes that appear artificial or set ups that appear real. Other interests include miniatures, optical illusions, and collages, all of which relate to my love for Surrealism. I’m more interested in making music than in listening to it and I enjoy reading books, mainly fiction but also history, psychology, and spirituality. I’m very interested in ritual, synchronicity, dreams, and time.

Can you talk about your travels and living abroad? How did those experiences shape your vision as an artist/film person?
After college I spent five years living in Japan, Germany, and the Czech Republic. I left two days before 9/11, and this gave me an outsider’s perspective on America and everything that happened afterward. Were it not for that experience, I wouldn’t have written my first feature, which in the end was my attempt to both understand America and re-mythologize it from a foreigner’s perspective.

As an artist, living abroad was a struggle, but a fruitful one. I went from teaching English, to supporting myself in Tokyo, to completing two short films and landing a job at Barrandov Studios, Prague. I spent all my free time either scriptwriting or studying European Cinema, un-enrolled at FAMU - a film school where some of my favorite directors attended, including Milos Forman, Vera Chytilova, and Jan Nemec. Since European schools tend to treat film making as an art form, I saw in their cinema a mirror of my own desire to make films that tackle philosophical and spiritual questions. During the three years between Prague and Berlin, I also completed two music albums with the Berlin-based group VOCO. I sang and played guitar.

I want to make sophisticated films, with artistic integrity, in America rather than Europe, where even independent cinema is entrenched in the values of commercialism. Not wanting to compromise this vision, my solution was to create a production company, based on the model of non-profits, and to make films that could be self-distributed over the Internet. I started
Arcanum Productions with these goals in mind. In November Arcanum uploaded a 20-minute short film that I directed and photographed in the Czech Republic titled “Yonder,” which viewers can now watch for free on our site.

What is a typical week in your life like?
I work as a freelance photographer, videographer, and editor; everything depends on the work that comes my way. When I have free time, I’m always working on the promotional aspect of trying to launch a feature film. I also love to spend time at photo libraries, like the International Center for Photography, or the image library at the Mid-Manhattan library. In the evening, I watch films with my wife Kaori and our two cats. Or I play the guitar. If it’s Friday we go out to a museum.

You are currently in the midst of developing a feature film... Can you talk about it? How did it come into being? Where are you in the process, what happens next?
AMERIKA: a notebook in three parts begins with a young Japanese woman named Kat, who is trapped in her job as a hostess in Tokyo. To escape, she leaves for America. This character grew out of my wife’s experiences, and conversations I transcribed in 2004. Kaori temporarily worked as a hostess and had intimate knowledge of that world. Imagine a situation where a man pays $500 to $2,000 to sit down, drink alcohol, and talk to beautiful women. That would almost never happen in America, unless it included sex. Something very different was at play in these Tokyo clubs that combined wealth, fantasy, and a psychological exchange. It never occurred to me that a Japanese hostess would make an interesting protagonist until Kaori described how these women often lost their identities through decadence and self-destruction. I regarded this self-destruction as a mirror of the commentary I wanted to make on American identity, history, and culture. 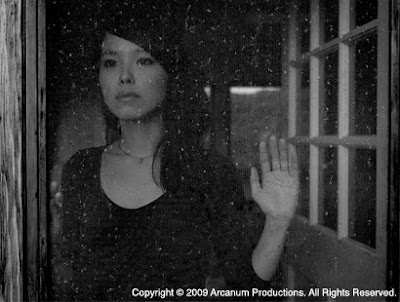 After Kat leaves Japan, her journey begins to overlap with America’s historical evolution, as she heads west and finds herself on this multi-dimensional road-trip; all the archetypal energies of America’s history rapidly unfold like a bizarre dream spiraling toward an apocalyptic conclusion. Kat eventually makes a sacrifice that symbolically turns back the clock. It’s an event of rebirth and reversals. I refer to this as “re-mythologizing.”

All our principle actors are cast and we have a solid crew of international artists from America, China, Japan, Iceland, and Germany. We also have our locations scouted and recently sparked a collaboration with Colleen, a French composer whose music resonates with the dream-like quality of our story. Now we’re waiting for an angel to step in and say, “I’m here to fund your film.”

How did you become interested in film?
When I was 13, my father got me a job at a local store, which also rented movies. Besides my meager pay, I could borrow movies for free. In junior high, my brother bought a video camera and we started making short films. But it wasn’t until I started college, and saw the films of Andrei Tarkovsky, that I really felt the drive to be a filmmaker. From that moment on I wanted to be a filmmaker and create poetic films with spiritual themes. Ten years later, I still feel the same way.

What is your creative process?
It’s always different. AMERIKA began as a script, which I began writing in cafes in Berlin. I needed that social environment. When we moved to Prague, I began collecting hundreds of images from photo books at FAMU that I would copy, print out, and hang up on the wall, where they began to tell the story from a visual perspective. I began casting and recording actors. My goal was to integrate each person’s real identity with the character on the page. When I began collaborating with writer Honey Lapcharoen, we tightened the narrative by removing what didn’t need to be there and adding things that were missing. It was all very organic. By the time I began taking promotional photographs for our website’s gallery, the vision completed itself. 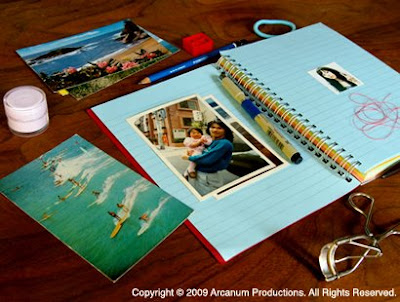 (Kat's notebook from Part I of AMERIKA: a notebook in three parts. Photo: Mika Johnson )

What books, mentors, teachers, films, etc. have had the most influence on your development as a creative person?
It all started with my father, who is a natural performer. I was more talented behind the camera. When I think of the people who’ve influenced my development as a creative person, there are really a few that stand out: my former professor, Tim Scholl, who continues to teach and inspire me; my friends Bonnie Huie and Peter Hlinka, who I made my first short films with; and then there are those people in my life right now, who continually support, inspire, and push me to develop. These include my friends Robbie Schneider, Honey Lapcharoen, and Kaori. I’ve taken most of my lessons from my favorite filmmakers, such as Andrei Tarkovsky, Ingmar Bergman, Luis Bunuel, Sergei Parajanov, Hiroshi Teshigahara, Federico Fellini, Aleksandr Sokurov, and Bela Tarr. These are the people I study.

What are you currently reading?
The Brothers Karamazov, by Dostoevsky. It’s good, especially in the bathtub.

What inspires you?
My wife’s drawings. Our cats. Recently, archival films. And for the last two years, the museums here in New York City, especially the Metropolitan Museum of Art. My favorite sections are the Arts of Africa, Oceania, and the Americas and a reconstructed room, in the American Wing, which I know to be haunted.

What is your dream project?
I am currently completing my second feature script, which combines the genres of classic noir and sci-fi, as it follows a detective who is attempting to solve a bizarre murder in a dystopic version of America, where pharmaceutical drug companies have come to control consciousness. My dream project would be to make this film interactive, so that viewers could choose their way through the story, like a narrative labyrinth. I can foresee multiple endings, hidden scenes or texts within scenes, etc.

What words do you live?
“A sincere belief that anything is so, will make it so.” William Blake

“Wishes are recollections coming from the future.” Rainer Maria Rilke

How do you get through artist's block?
I find that working on multiple projects helps. When one isn’t flowing, I turn my attention to another. In time they all grow up.

Ohio native Mika Johnson is an accomplished filmmaker/photographer and holds a B.A. in Film and Religious studies from Oberlin College. Having already directed a documentary (Lake Street USA) and two independent short films while living in Japan and the Czech Republic (The Mountain of Signs, Yonder), Mika anticipates directing his first feature length motion picture AMERIKA: a notebook in three parts, a film loosely based on his wife and collaborator Kaori Mitsushima. He currently lives and works in New York City as a photographer, videographer, and video editor.