AHHHHHH, now I can breathe a sigh of relief! Ever since the big snowstorm we haven't had internet service at our house which means I have to drive all over town trying to get online at all the places that offer it for free! Today, it's fixed! and I can post something new. I am majorly antsy because I feel like everything is on hold.....I haven't been able to move into the new studio space because the electricity isn't hooked up yet, my freelance gigs don't kick in till next week, my art materials are all packed up....so what is there to do? This past weekend I visited D and we had lots of fun in Pittsburgh! There was a praying mantis clinging to the outside of his house for 2 days. Aren't praying mantis's good luck?
We also went to see Borat. I'm embarrassed to admit I laughed my head off- especially at the unfortunate incident in the hotel where Borat catches his trusty companion doing a naughty deed, I don't want to ruin any surprises so I will say no more. This is definitely NOT a movie I would send my Mother to go see. It's thick with potty humor, raunchiness, and offensive to every religion and race. But, you've gotta hand it to Sasha Baron Cohen for going all the way and over the top. The best part was when Douglas turned to me in the movie theatre and thought all the people Borat comes into contact with in the movie are in on the joke-- which they are not! That made me laugh tremendously-- ah ahahah ahaha ...... 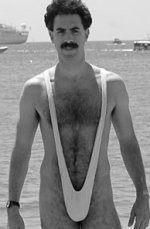 Also, I'm embarrassed to admit I watched a small portion of America's Next Top Model. It's a bit of a guilty pleasure as I'm waiting for Lost. 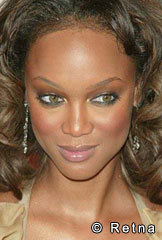 I was struck by a Tyra-ism. She was telling the girl who was getting the boot that she didn't have enough confidence in herself, that the judges were stunned by her beauty and believed in her, but she didn't believe in herself and that it was apparent to them in the way she flaked out or felt silly in the challenges. She explained to this young, inexperienced girl that even if she didn't feel confident she had to act as though she did. Her exact words: "You've gotta fake it to make it." I really liked that and wrote it down for myself. Ah, words of wisdom from Tyra Banks (or the writers). (Don't you like the juxtaposition of the picture of beautiful Tyra Banks and hairy, gross thong wearing Borat! Clever! Anyways, I came home on Wednesday and have been checking in on the studio, going to the gym and playing with Smitty. For those of you who've forgotten about Smitty- he is our neighbor's Border Collie. He is such a sweet, smart dog but grossly neglected . So, sometimes we take him for walks or bring him to the house and play with him. 2 nights ago, I was giving Smitty a good petting- laying on the floor next to him when he laid down too and picked up his paw so I could scratch his belly. Dogs do not question their dog-ness. As I always like to say. Today, I started perusing some recipes for Thanksgiving. I would love to incorporate pomegranates into the mix.... Delicious! 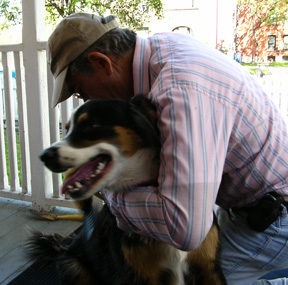