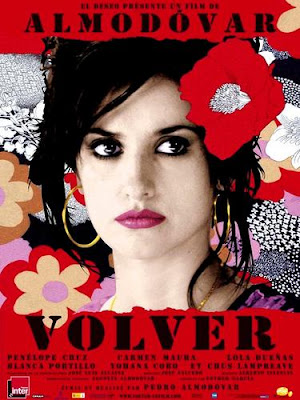 Hola! I am in Pittsburgh for 2 weeks and last night, we celebrated Douglas's birthday with Greek food and VOLVER! I really enjoyed it although I felt the pace was a bit slow towards the end. Before I start talking about plot and theme and such. Can I just say Penelope Cruz was gorgeous-- what a bod! She looked fantastic as a frazzled, hard working wife and mother with her hair always bed-headedly disheveled, sleeping in her kohl-ringed eyes (bedroom eyes) with the big gold hoop earrings. She wears these strange patterned outfits that don't quite go together but somehow totally work. She made me think of Italian movie stars in the 60s like Sophia Loren with the pencil skirts and the cleavage skimming little sweaters. Muy Caliente! I loved the whole look! Incredibly sexy!

The story line is really about relationships between mothers and daughters, and secrets..... as kept by Penelope Cruz and her Mother. The film feels like it can't quite decide between being heavy and 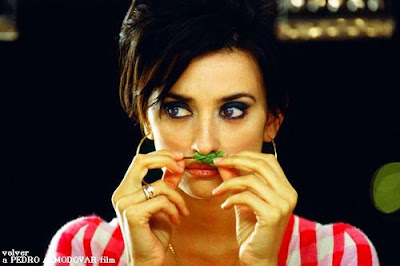 sad or light yet suspenseful or some combination thereof. Some scenes were poignant in portraying women taking care of each other through illness, old age and adventure. I really thought all the actresses were great but I couldn't take my eyes off Penelope- she was luminous and in her native Spanish, so much more comfortable on screen than in American films she's been in. The end credits consisted of floral and linear patterns (like what you see in the poster above) animated and moving 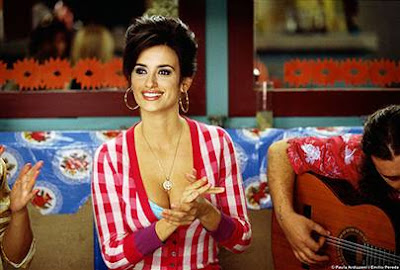 geometrically across the screen. I really liked the patterns- but it didn't seem to fit with the end of the film somehow-- it made me think of Marimekko patterns- and I'm not really sure how that fits in with the film?


The other film I saw, with another gorgeous woman in the opposite extreme, was The Curse of the Golden Flower starring Gong Li and Chow Yun Fat. Now, this movie was AMAZING for its opulence alone-- the costumes, the sets, the jewelery. It was a feast for the eyes! 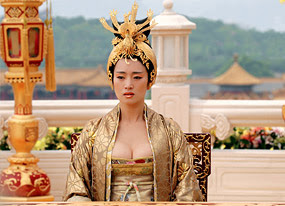 Again, Gong Li is just so beautiful and in this film she is decked out in crazy jewels, head pieces, costumes, nail guards, shoes, and makeup-- gold and copper eye shadow and tangerine lipstick with gold. Supposedly, the film is set during the Tang Dynasty, a time that can be comparable to the the decadence of Versaille and French Aristocracy. Everything was over the top. All the women wear bust binding, cleavage revealing gowns. The entire palace courtyard is filled with pots of the cursed golden flower-- the Chrysanthemum.
Other films by this same director include Hero, and House of the Flying Daggers. I loved Hero for its color palette and beautiful cinematography. House of the Flying Daggers was a martial arts amazement. I don't think this film is exemplary of either of those things. Although there are 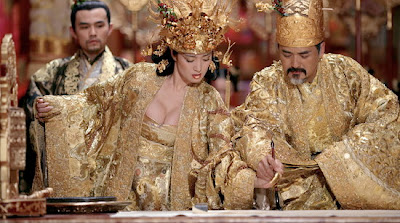 several story lines bound together here-- the most memorable part of the film is the visual.
Again, I question the choice of end song which played during the credits. This music sounded contemporary and totally transported me out of the film setting and into the present...a bummer at the end of the movie.