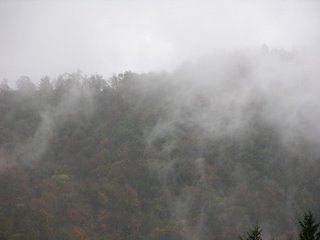 Hiya-- I've added some thoughts and pictures in this weird purple color!
Hello Friends,
It was with mixed emotions and heavy heart that I drove home on Friday from Vermont. My trip back to Buffalo was one of the worst EVER -- actually, the first 2 hours or so were fun, beautiful because I got to see the fall leaves and I was ambling through the green mountains on a rainy day and the mist was hanging over the trees.
I stopped in Montpelier-- which is the cutest town, to go to Rivendell Books where I bought some postcards and a copy of The Mermaid Chair, (which subsequently, has been a disappointment, but a good read for someone who is sick! and stopping for photo opps along my ambling way. Here is a waterfall I happened to pass by on the road..... 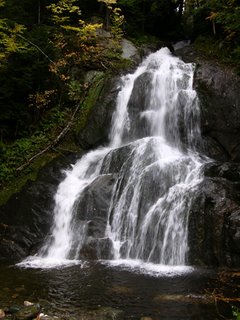 It was the first peak fall color weekend and the leaves were really beautiful shades of gold, red and orange. However, the day just went downhill after mapquest told me to go right when I should have gone left and it took about 45 minutes to realize it....... so 45 minutes out and back plus a strong latte from a really adorable coffee shop called Jesine in Montpelier, meaning, I had to stop for the bathroom twice, let's just say I was a long way off course. I did get to also see this very cute hidden town called Warren (where I stopped to use the ladies room at the Pitcher Inn). Anyhoo- by the time I was on track I should have been half way home and I had only driven about 2 of my supposedly 8 hours. 13 hours later, I finally arrived home! Plus I stopped in two places in NY to see if I could stay the night in a hotel because I was exhausted-- just my luck though, all rooms were booked because of a dog show (of all things) and parents weekend at a local college. GRRRRR. I was not a happy camper! 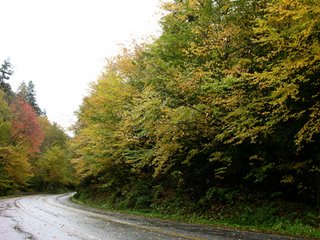 Part of me thought it was an omen, that I should've stayed. The thing that stopped me from staying was the realization that the monthly turn over of people would be really difficult to get used to. You grow fond of people that are leaving in a few short weeks and spreading out over the globe. That would make me sad. Plus, Johnson is so removed from the world at large, I went for weeks without hearing any news. I don't know if I could handle that in the long run.

I didn't have as much motivation to write I as actually thought I would in the last two weeks at VSC. I tried, but every time I sat down to write, the words felt forced. I had such a great time, met so many wonderful, talented people and lived a very simple, (in a good way) focused life. I felt like I had a purpose every day and there weren't a lot of distractions to take me away from that purpose. The beauty of it was that there were all these like-minded people talking about art and day jobs and how much they can suck (the day jobs, I mean) and a whole host of other issues! If I got bored or nervous I could walk down the street and find a friend in a different studio, like the wonderful Patti, who lives in S. Dakota, who I visited on numerous occasions. These walks were a dose of inspiration and friendship that created a community. Now the question is how to recreate that community?
In the last two weeks I had an all girl posse to trek around with--named after the Bad Girls Cafe, which was right next door to my studio building-- the Bad Girls reeked havoc in Johnson and then blew outta town. Clarisse, Louise, Rebecca and I had a raucus evening at the Bee's Knees, an organic restaurant with live music and drinks- where we closed the place. I'm not at liberty to discuss all of our Bad Girl antics-- but just know that they were bad!
The day before we left, the Bad Girls Cafe changed their name to the Groovin' Beans Cafe-- a horrible - unbefitting moniker for a really cute place. The Bad Girls will live on even if its namesake is gone.

Otherwise, I got to see the Bread and Puppet Museum perform at Johnson State College-- some pictures of that: 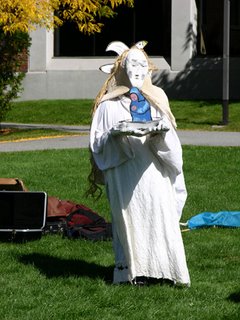 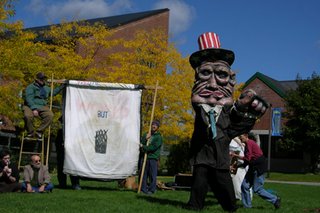 I also put some of my new book work in a show at the gallery at VSC with some very talented fellow artists!

I had two studio visits with visiting artists. One was exceedingly unhelpful and downright dismissive. The other was kooky but helpful--

Meanwhile, I'm home sick with a cold, although finally starting to feel better today- and haven't gotten out of my pajamas in two days. I would write more now but just haven't got the stamina. So now the question of how to put some Vermont in Buffalo is nagging at me. Luckily, I received an email from the talented and lovely Ellis Avery, famous author whose new book is out in December.... saying the first two weeks back from Johnson would be difficult but it will soon get better. Thanks Ellis!

As for my mysterious person from the past who left a comment here-- please email me braunlauren@gmail.com!! I think it could be one of two people......??? I can't stand the suspense!